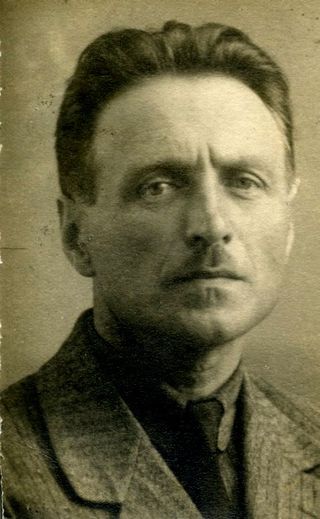 Mykhailo Boychuk was born in Galicia during the time when the region formed a part of Austria-Hungary. In his youth studied painting in Lviv and in Western Europe. Few years spent in Paris where he was proven to be an already formed artist. Byzantian, Kyiv Rus and Proto-Renaissance art and Ukrainian folklore influenced Boychuk’s painting, frescos, mosaics and posters. As time passed he started to be considered as founder of own artistic movement called Boychukism as well as a similarly-named school. In 1917 Mykhailo Boychuk moved to Kyiv. His relations with the Bolsheviks authorities at first were quite warm as he was assigned to mural propaganda works and restoration of ancient frescos. Worked as lecturer at educational institutions of Kyiv and Leningrad.

But gradually everything changed. In 1930s both the artist and his followers- “Boychukists” were heavily criticized. They were accused of formalism, failure to meet the needs of socialistic art, distortion of Soviet reality, and nationalism. 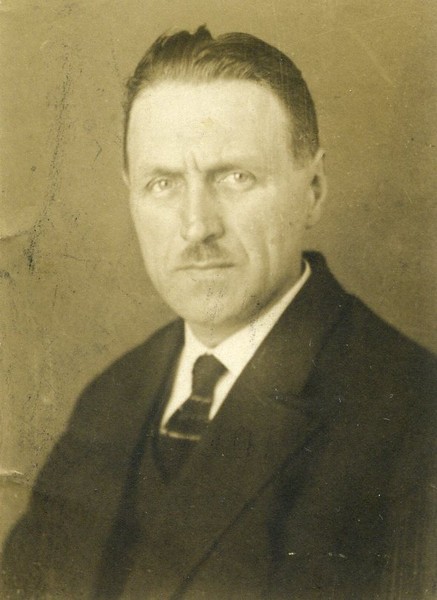 In autumn 1936 Mykailo Boychuk and few of his students were arrested by NKVD. According to the investigators, for a long time the artist was agitating the youth with the ideas of nationalism. In 1934 together with his associates (Vasyl Sedlyar and Ivan Padalka were in charge of them) allegedly created a “counter-revolutionary national-fascist terrorist organization”. Supposedly the organization was fighting for the independence of the Ukrainian state and not only conducted propaganda and “wrecking in visual arts” but also planned terrorist attacks against the administration of the Ukrainian SSR namely Stanislav Kosior and Pavel Postyshev. The group was said to be connected to the network of similar organizations and Boychuk was said to be famous for his “integrity and rigidity” in the nationalist circles. 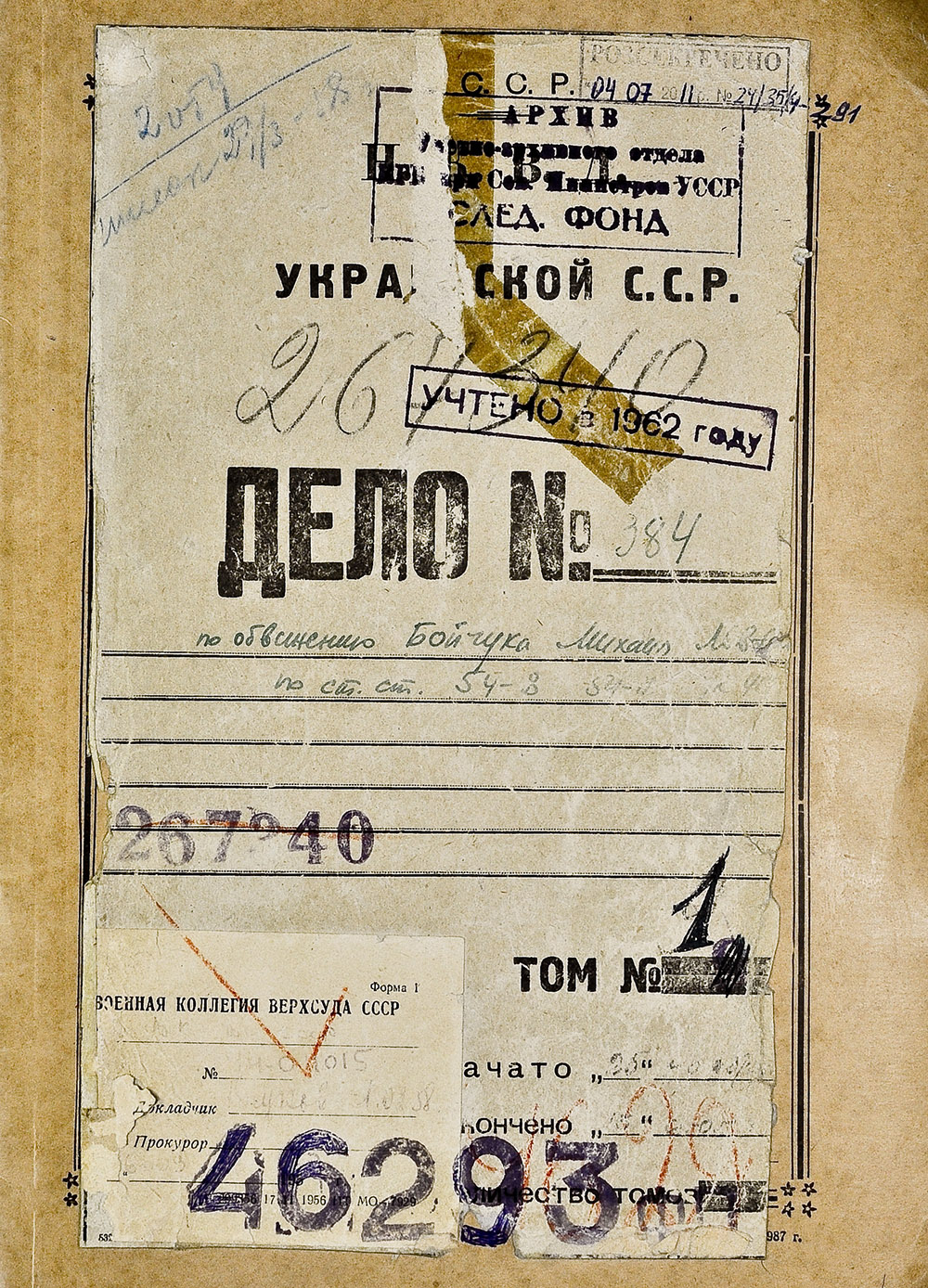 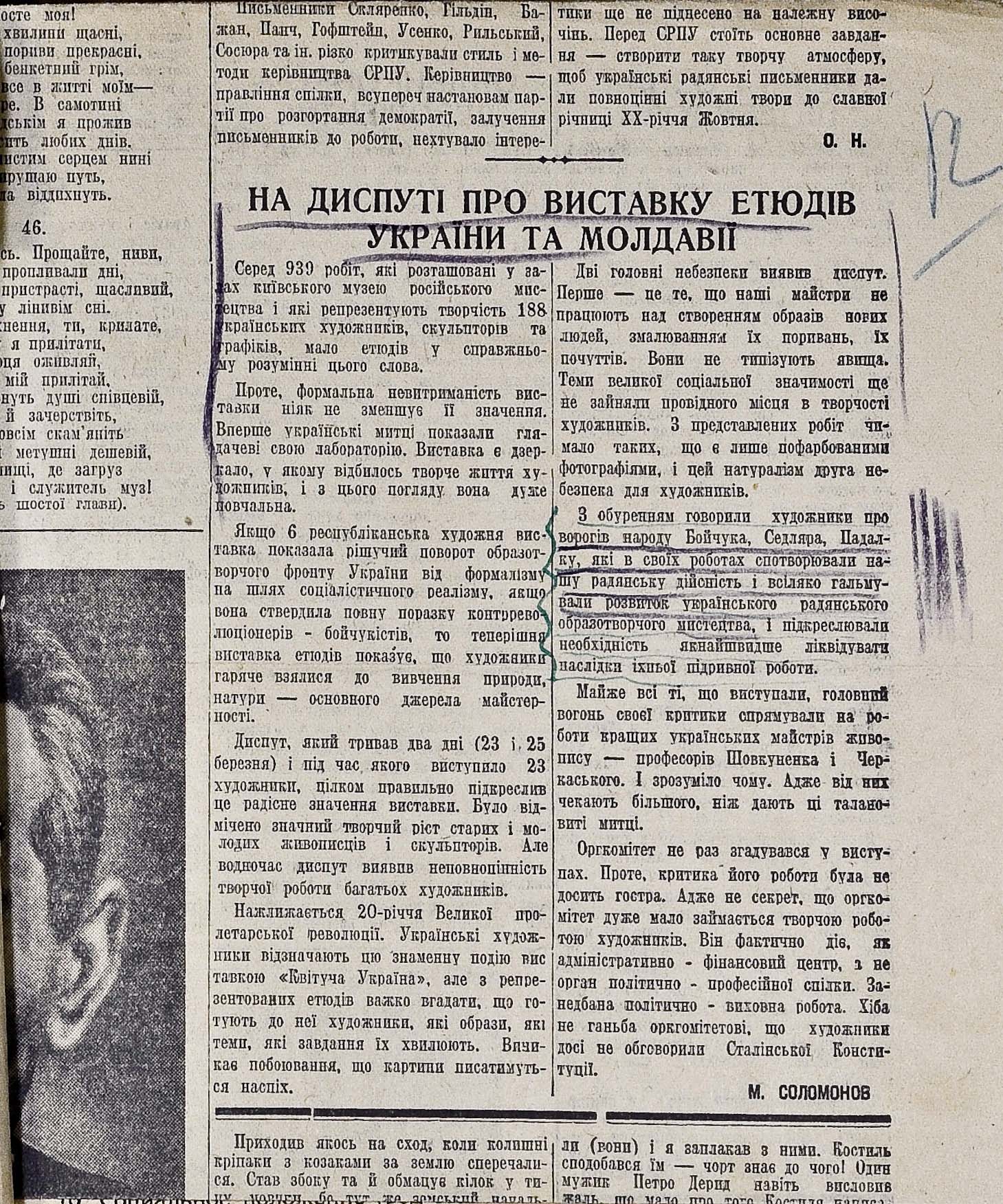 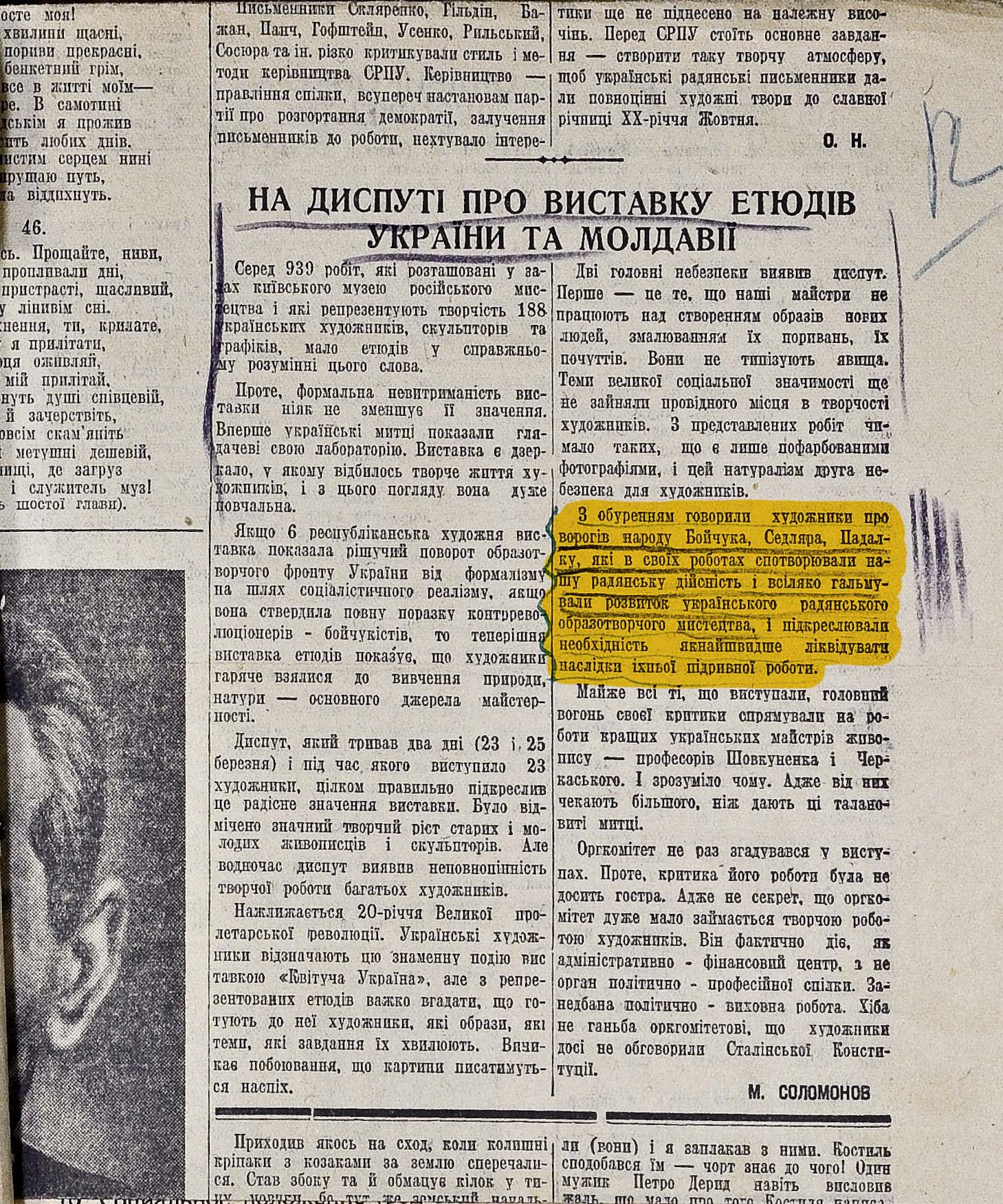 Newspaper article published in 1937 is filed to the criminal case with the following words: “In high dudgeon artists talked about the enemies of the people Boychuk, Sedlyar, Padalko who distorted our Soviet reality in their works and in every possible way sabotaged development of Soviet Ukraine visual arts and emphasized the need to eliminate aftermath of their sabotage as soon as possible”.

“Boychukists pose a serious threat not only with their nationalist-focused art but their other activity. Artist Boychuk who is the ringleader of this movement has a reputation of a hardline nationalist. He is touted as “the second Kurbas” in these circles. As I personally know, mostly Boychuk was praised by Kurbas, Khvylovy, Yanovsky”.

Among other older Boychuk’s “sins” criminal action also mentions his acquaintance with famous participants of the Ukrainian national movement as Mykhailo Hrushevsky, Volodymyr Vynnychenko and Metropolitan Archbishop Andrey Sheptytsky who helped the young artist to move to Europe for studying.

Relying on the interrogation file “Boychukists” immediately plead their guilt.

13 July 1937 Military Collegium of the Supreme Court of the Soviet Union sentenced Boychuk and four of his students. Trial procedure was closed without the prosecution and defence, no witnesses were called. All five were sentenced to death and executed by shooting the same day. 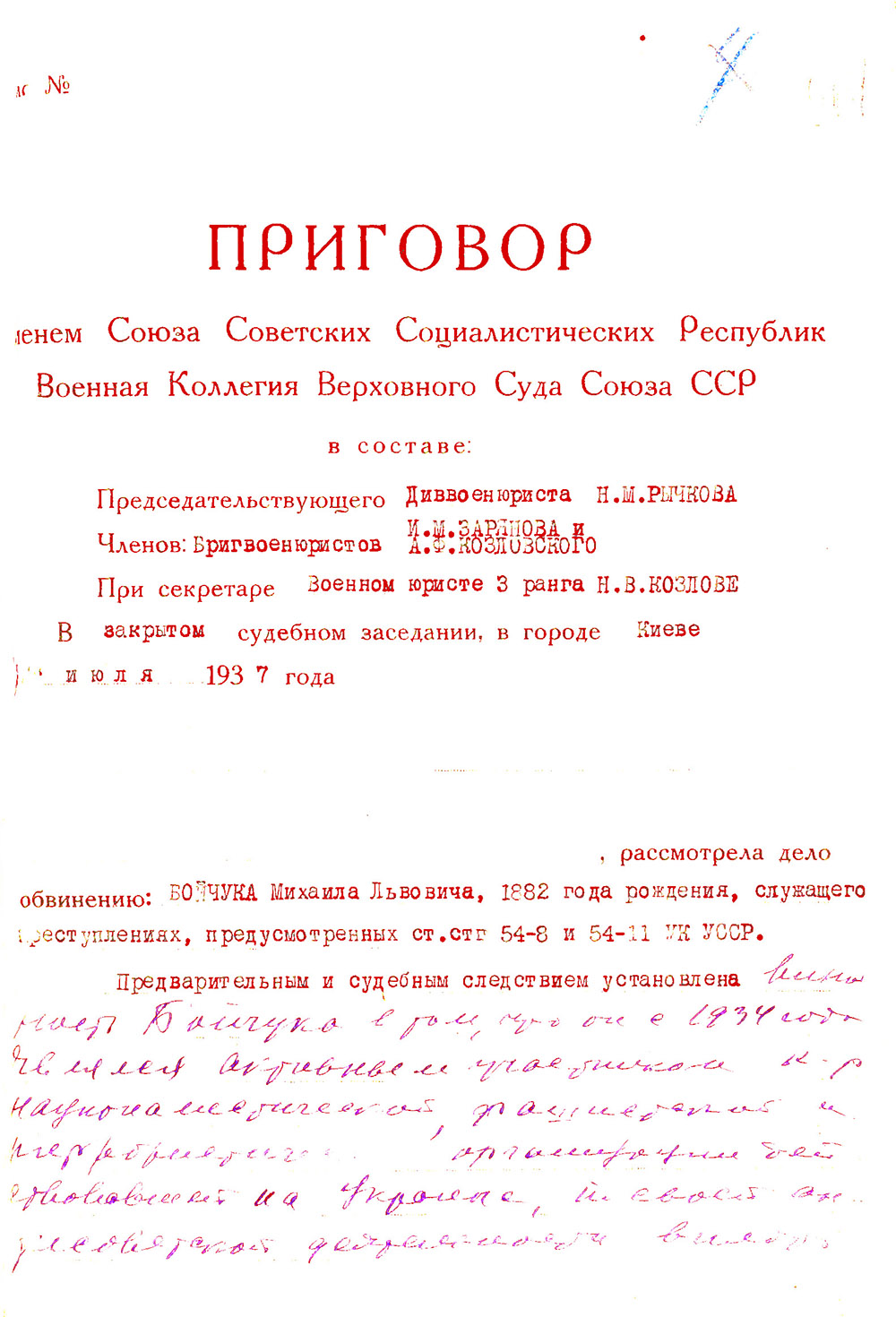 In 1937 suspected in espionage and involvement in the same “terrorist organization” Mykhailo Boychuk’s wife, artist Sofia Nalepynska-Boychuk was arrested. Despite all the objections against the accusation she was found guilty and executed 11 December 1937.

NKVD officer Mykola Hrushevsky who was conducting the investigation didn’t outlive his victim for long as he was arrested a couple of weeks later after the artists were executed. In particular Hrushevsky was charged with “treason activity in NKVD”. He confessed to frame-up the cases including Boychuk’s case as ethnographer Anton Onishuk denounced on the nonexistent “Boychuk’s organization” by the direction of Hrushevsky. Both Hrushevsky and Onishuk were executed by shooting the same year. But their confession neither saved Sofia Nalepynska-Boychuk from execution, nor wives of other “Boychukists” from exile.

Significant part of Mykhailo Boychuk’s works and his followers were destroyed. For some time official critics labeled artists who didn’t fit into the frame of socialistic artist canon with “Boychukism” term.

When the rehabilitation of victims of Stalin’s regime started in the second part of the 1950s, following the request of relatives the government reviewed their cases. Boychuk’s conviction was overturned and the case was closed as no crime was committed.

Everyone can read and download the KGB documents about Mykhailo Boychuk on the website of the Digital Archive of the Ukrainian liberation movement.