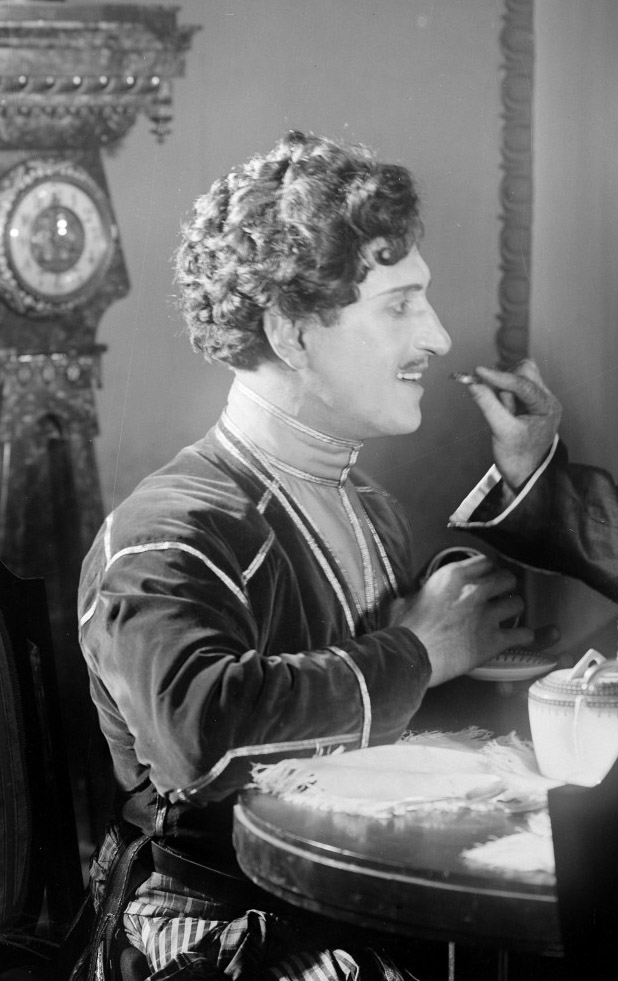 Since school times, he was involved in theatrical life, participated in school performances etc. He continued as a professional theatre actor from 1918. Mikaberidze was working in different city theatres in – Kutaisi, Batumi etc.

Since 1921 he has been an actor in Rustaveli Theatre in Tbilisi. Same time, he started a cinema actor career. He was one of the famous movie stars in 1920’s Georgian cinema.

Kote Mikaberidze turned into a movie–director himself. He prepared a masterpiece of a silent movie – “My grandmother”, which was blocked by Soviet censorship and was banned until 1976.

He joined a communist party in 1939. He was working as a movie–director in a Georgian movie studio during 1940-1950s.

On 2 February 1957, KGB of Georgian SSR arrested Kote Mikaberidze, suspected of being the author of 4 anonymous letters sent to Soviet newspaper editions and individuals.

Mikaberidze fully confessed that he wrote those letters and explained that it was because of the effect of suppressing pro-Stalinist demonstration of youth on 9 March 1956, general depression and mental disorder.

"...He understands the scale of a crime he committed, regrets it but says that he can't explain his activities and links it with amnesia. He claims that all this was because of his illness, especially at that time when he committed a crime. In the hospital, he is mainly quiet, contact, with working abilities; often paints – clear enough figures.
He communicates with doctors correctly, speaks about his artistic plans with excitement. Sometimes – contactless, doesn't speak about anything. He mainly stays in bed. In the intellectual sphere, there aren't any real deviations; thinks – logically, associations – reasonable. Active attention is a little bit slow. Memory, especially fixative, is slow. Don't express foolish ideas; no hallucinates. Critical about reality.
Accordingly – we conclude that patient – Mikaberidze K.A. isn't suffering from a psychiatric disorder but is expressed psychopathic personality. Nowadays, he suffers from hypertonic and sclerosis of vessels of the brain. As we see in materials of investigation and according to materials of psychiatric expertise, during the commitment of crime, he was in a condition of reactive neurosis (asthenic-depressive syndrome), but the real symptoms of a psychiatric illness weren't found, and so, we can accept him as normal. Around hypertonic, he might be rehabilitated in a prison hospital".

On 26 April 1957, the Supreme Court of Georgian SSR sentenced Kote Mikaberidze to 3 years of imprisonment. He completely served his sentence in a Mordovian political prison camp.

From 1959, after being released from a prison camp, he returned back to his homeland.

Everyone can read and download the KGB documents about Kote Mikaberidze on the website of the Digital Archive of the Ukrainian liberation movement.