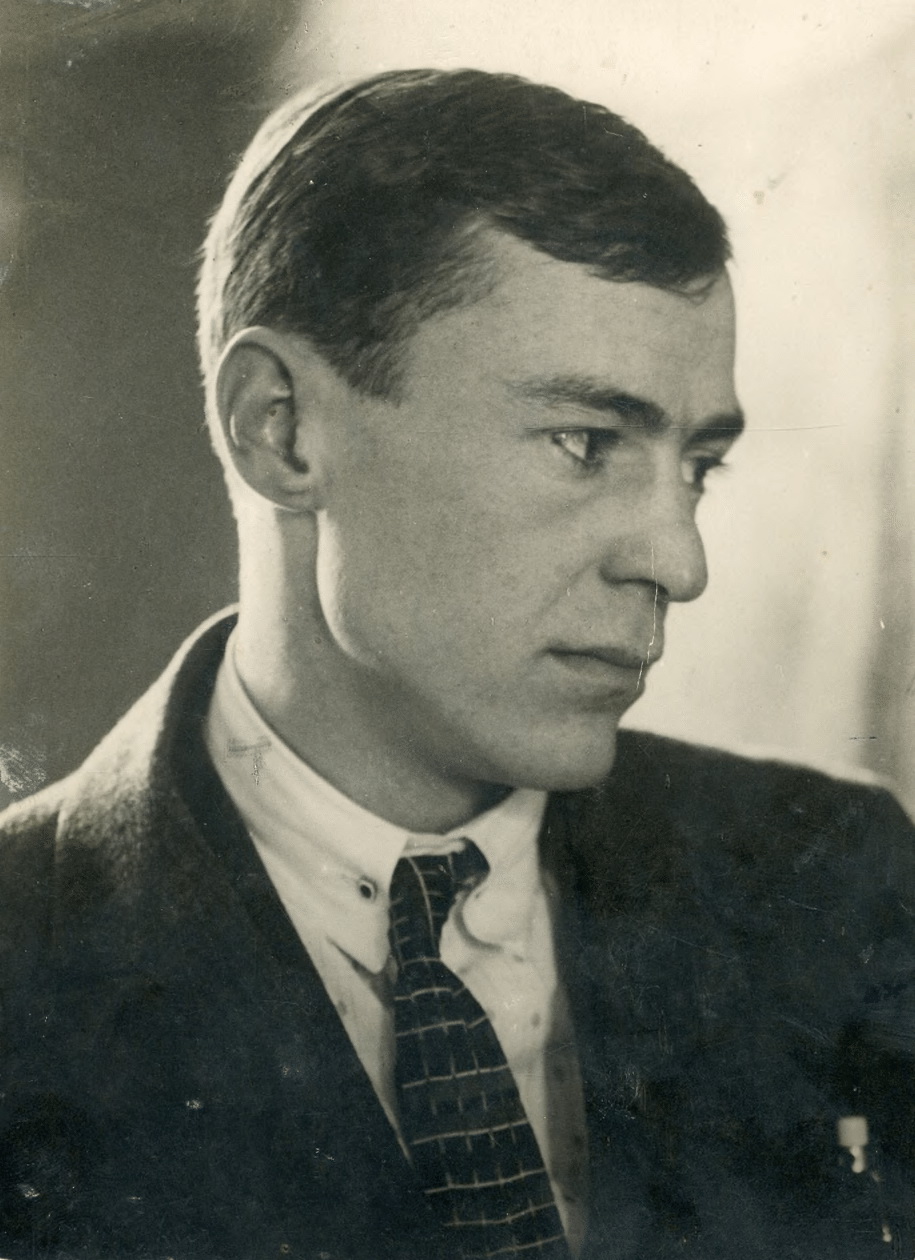 Valerian Pidmohylnyi was born in 1901 at Katerynoslavshchyna (now Dnipropetrovsk Oblast). Published his first book of novels “Novels. Volume 1” when he was 19. In the beginning of 1920s moved to Kyiv where he wrote his novel “The City”. In 1932 moved to Kharkiv. NKVD accused Valerian Pidmohylnyi of participation in a counter-revolutionary terrorist organization. In 1937 he was executed by shooting at Sandarmokh forest massif (now Russia).

In December 1934 representatives of law enforcement bodies came to Kharkiv “Slovo” (The Word) house for new arrests. In apartment 57 of the writer’s house they were going to conduct a search hoping to find evidence to accelerate the investigation. And they did found, 10 books and correspondence. The seized property belonged to Valerian Pidmohylnyi.

NKVD accused the artist of participation in a counter-revolution terrorist organization that allegedly planned the assasination of the leadership of the Communist Party. Mykola Kulis, Valerian Polishuk, Yevhen Pluzhnyk and Hryhory Epic were arrested with the same accusation. Seventeen cases were united into one named “Counter-revolution Borotbist (Fighters) organization”

— You are accused of participation in a counter-revolutionary terrorist organization aimed to organize terror against the leaders of the party. Do you plead guilty?

This is the dialogue between the NKVD investigator and the writer 11 December 1934. Pidmohylnyi further refused to plead guilty.

Valerian Pidmohylnyi wasn’t the first arrested in his family. Three brothers of his wife were imprisoned in Kyiv, one of them hung himself, other two were exiled.

Despite the efforts of NKVD, the puzzle wasn’t fully completed.

One the first to speak about involvement of Pidmohylnyi to the “counter-revolutionary terrorist organization” was allegedly writer Oleksandr Slysarenko. During the interrogation this evidence was mentioned but the artist objected: “I had distant relationships with Slysarenko as with someone who is deeply unpleasant. I have never been involved in any counter-revolutionary organization”.

The same happened with the evidence of fable writer Serhiy Pylypenko. He allegedly proved to the investigators that Pidmohylnyi was in a terrorist reserve. It was also a surprise for Pidmohylnyi as he had never even greeted Pylypenko, let alone involvement in the same organization.

During the interrogation Slysarenko informed that allegedly there was rupture among Borotbists: part of the activists including Valerian Pidmohylnyi criticized terror as a method of struggle. Poet Dmytro Falkovskiy also emphasized that Pidmohylnyi was politically left. But the memories of the interrogated differed. Writer Vasyl Vrazhlyvy in his conversation with the KGB mentioned Pidmohylnyi as an ardent supporter of terror. Moreover he also said that either he, or Valerian Polishuk or Valerian Pidmohylnyi were supposed to shoot party activist Pavlo Postyshev.

The author refuted all the accusations: “We were working in the field of literature…”. Military prosecutor was stunned: “How can you separate literature from politics? Could it be that literature has nothing to do with politics?”

Pidmohylnyi as the rest of the arrested artists had to have literature discussions with the KGB. The investigator reminded the writer their “nationalistic” orientation. Particularly the novel “Ivan Bosy” (“Ivan the Barefoot”) was attached as evidence. Novel “City” was spotted by the law enforcement bodies due to possible translation and publication in Germany. Custom statement on the confiscated literature and typewriter that Valerian Pidmohylnyi tried to bring from abroad in 1928 was also attached as evidence.

As early as in January 1935 the writer didn’t plead guilty. However already in a week he wrote with pencil on a piece of paper the following:

“Having considered my last interrogation from 9.I. in the presence of the head of the Secret Political Section of NKVD and the military prosecutor I have made a decision to give correct evidence on the allegations put forward instead of the incomplete and incorrect.
The accused V. Pidmohylnyi”

The next day he “confessed” his counter-revolutionary terrorist views, support of terrorist methods and his wish for death of Postyshev. One can see a red spot on this interrogation report near the signature of the detainee, the place of the report that he was close to and touched. There is an assumption this could be the blood prints of the writer which can be evidence of tortures. Biochemical analysis could prove but still it hasn’t been conducted.

NKVD had a clear plan to finish the investigation in 9 days. The investigator numerous times shifted the date of investigation completion: either it was necessary to interrogate the witnesses or get materials from other sources. 13 January after the “confession” writer was sent to Kyiv where the investigation had to be completed.

NKVD indictment on Pidmohylnyi was based on his two pieces of evidence in which he confessed his involvement to the counter-revolutionary group of nationalist writers and saw terror as a suitable method of struggle.

However 19 January in the Kyiv NKVD office the writer claimed:

They wrote into the indictment “The accused plead guilty”.

Valerian Pidmohylnyi together with fourteen other accused under the case of “Counter-revolution Borotbist (Fighters) organization” was sentenced to 10 years of imprisonment with confiscation of all property. Subsequently Pidmohylnyi with other prisoners were sent to Solovki prison camp in Russia.

In June 1956 three years after the death of Joseph Stalin Kateryna Chervinska sent a request to the KGB to inform if her husband Valerian Pidmohylnyi was alive. Correspondence with him terminated in June 1937.

According to MVD information Valerian Pidmohylnyi with other accused were executed by shooting in 1937. But they told the widow that her husband died in 1941 at the age of 40 from liver cancer.

The rehabilitation certificate of the military prosecutor office noted that Pidmohylnyi has partially plead guilty however according to the case materials his evidence and evidence of witnesses were rather contradictional, mixed-up and unpersuasive and thus have no credibility. In 1956 the case of the Borotbists was ordered to be terminated due to lack of a crime.

Group case of “Counter-revolution Borotbist (Fighters) organization” that included the case of Valerian Pidmohylnyi is stored in the SSU Sectoral State Archive.