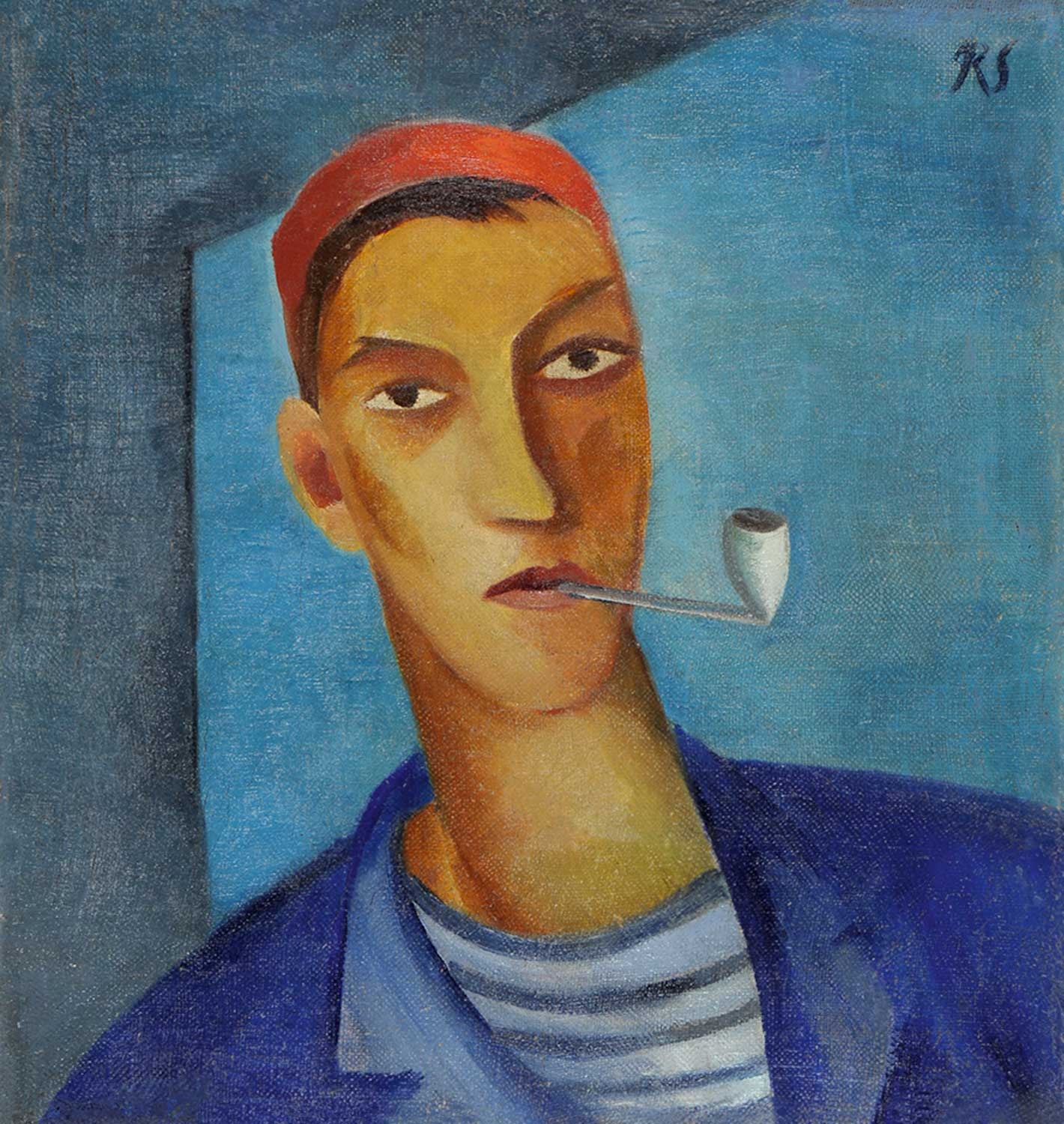 Suta was born in 1896 on the road in Dzērbene parish near Cēsis. He studied in a Realschule in Pskov but never graduated because he, together with his brother, fled to Riga in 1910 and for about a year, they worked on merchant ships as cabin boys.

In 1913 he decided to become a painter and started studies in Jūlijs Madernieks studio in Riga. Soon after, he was accepted into Riga City Art school. During this period, he became close friends with Jēkabs Kazaks, one of the first Latvian modernists.

He was forced to leave Art school in 1915 when his family evacuated to St. Petersburg due to WWI. While in Russia, Suta resumed his studies in Penza city Art school, where he met many other Latvian painters. Among them were Konrāds Ubāns, Jēkabs Kazaks and Voldemārs Tone. It was also here in Penza where Suta met Russian painter Aleksandra Belcova, his future wife.

In August 1917, Romans Suta enlisted into the 5th. Zemgale Rifleman regiment. Suta was in the Petrograd during October Bolshevik's coup d'etat. In December 1917, Suta returned to Latvia and, in 1919, became a member of the Expressionist group, which in 1920 transformed to the Riga artists group.

In 1922 Romans Suta married Aleksandra Beļcova, and they travelled through Dresden and Berlin to Paris. In Paris, he made the acquaintance of Amedee Ozanfant, Le Corbusier, and others.

After returning to Latvia, they introduced the Latvian public to ideas of Cubism and Constructivism, and Suta opened a porcelain painting studio Baltars in 1924. From 1929 until 1934, Suta worked in the Riga Peoples university as a lecturer of drawing and painting. In 1934 he opened his own studio in Riga.

In the late 1930s, Sutas marriage with Beļcova broke apart when it became clear that Suta had several love affairs already since the 1920s.

After the Latvian occupation by the Soviet Union in 1940, Suta started to work in Riga Film Studio as a Chief Designer for a movie – Kaugurieši. In late June 1941, when Suta was working on a film "Melancholic Waltz" about composer Emīls Dārziņš, he was ordered to evacuate to the Soviet Union with all his staff. He lived in Moscow, later in Almaty, and finally settled in Tbilisi. In Tbilisi, Romans Suta was working in a Georgian Movie studio and was involved in artistic life.

On 4 September 1943, Romans Suta was arrested by the NKVD of the Georgian SSR. The investigation claimed that it discovered an Anti-Soviet organization, which was preparing insurgency against Soviet rule with the aid of German Nazi forces. According to the NKVD conclusion, members of the Anti–Soviet group were printing falsified food tickets and distributing them to get finances for an illegal organization.

In the final conclusion of the investigation, quoted:

"...Suta, that together with members of the counter-revolutionary organization led by – Mustafa Shelia and Amierdjibi, they organized printing a false ticket of bread portions, he cracked a key of the ticket storage and started to print false tickets himself. He also confessed that while printing false tickets in Mzechabuk Amirejibi's house, they were listening to foreign radio channels and were involved in rude Anti–Soviet talks".

"We all were against the Soviet authority and were criticizing the existing regime. Most hateful to the authorities were Romans Suta, Shelia and my mother. Romans Suta in every mention of Bolsheviks–Communists were accompanying them with a curse and filthy expressions and at the same time he was expressing his special hate towards a personality of the father of Soviet nations".

Archive of former KGB of Georgian SSR contains Criminal file of a group of citizens, including Romans Suta – #44264 – dozens of volumes. The main part of the criminal file was given to the Museum of Georgian Literature in 1991 and then lost. Already mentioned remaining volumes are – materials of Supervision on the criminal process, Materials of Session of the tribunal of NKVD forces, personal documents of victims, registration photos of NKVD. As suspected of being a member of an underground conspiracy, remains of materials about Romans Suta are focused on his “Anti-Soviet activities” – an attempt of escaping abroad, printing a false ticket for food and his relations with other suspects and his artist profile is neglected. Materials also show how state security was working to find a trace of Romans Suta’s family.

Everyone can read and download the KGB documents about Romans Suta on the website of the Digital Archive of the Ukrainian liberation movement.