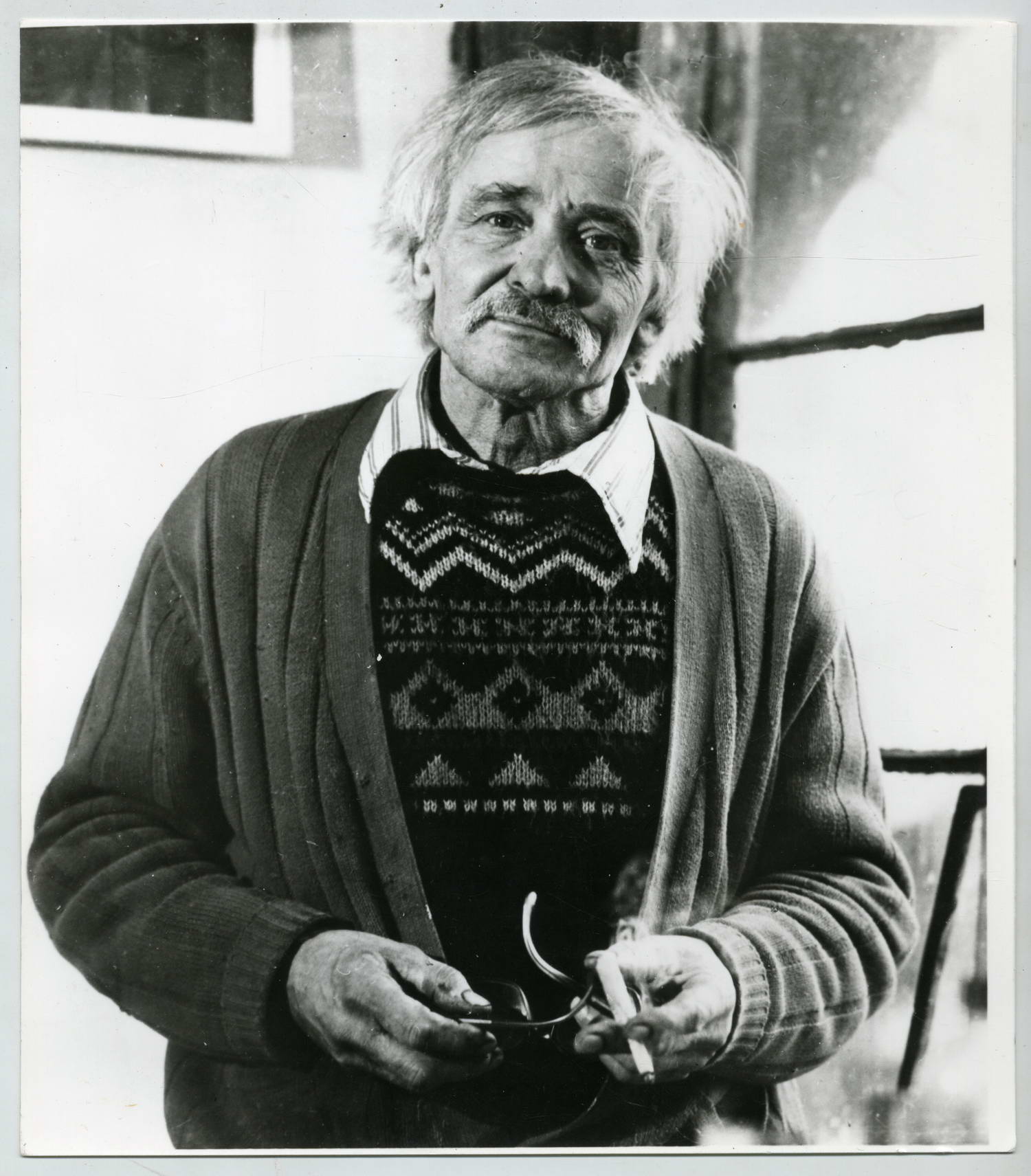 Opanas Zalyvakha was born in 1925 in Kharkiv Region. But he grew up in the Far East in Primorsky Krai, Russia as his family moved there trying to escape from Holodomor.

In 1953 Opanas graduated from Leningrad Art and Pedagogic School, in 1955-1960 studied in Leningrad Painting, Sculpture and Architecture Institute named after I. Repin. After the graduation worked for a year in the Art Foundation in Tymen.

In 1961 Opanas Zalyvakha moved to Ivano-Frankivsk. His workshop was located in the former Armenian church. He also lived there till he received an apartment in July 1965. Already in a month he was detained and next year he was sentenced to 5 years of the camps. He was released in 1970 being still under the administrative supervision, his home was searched.

In Ivano-Frankivsk Opanas Zalyvakha found himself in an artistic environment with such artists as Vasyl Turetskiy and Oleksandr Korovai. They were discussing “anti-Soviet” social-political and artistic works, and communicated with Sixtiers from Kyiv and Lviv.

In 1964 Alla Horska, Lyudmyla Semykina and Opanas Zalyvakha produced a stained glass composition “Shevchenko. Mother” in the hall of the Red University Building of National University of Kyiv. However the commission of the Kyiv Regional Board of the National Union of Artists of Ukraine considered the stained glass composition as “ideologically hostile” and it was destroyed.

Extract from the verdict on the stained glass composition: 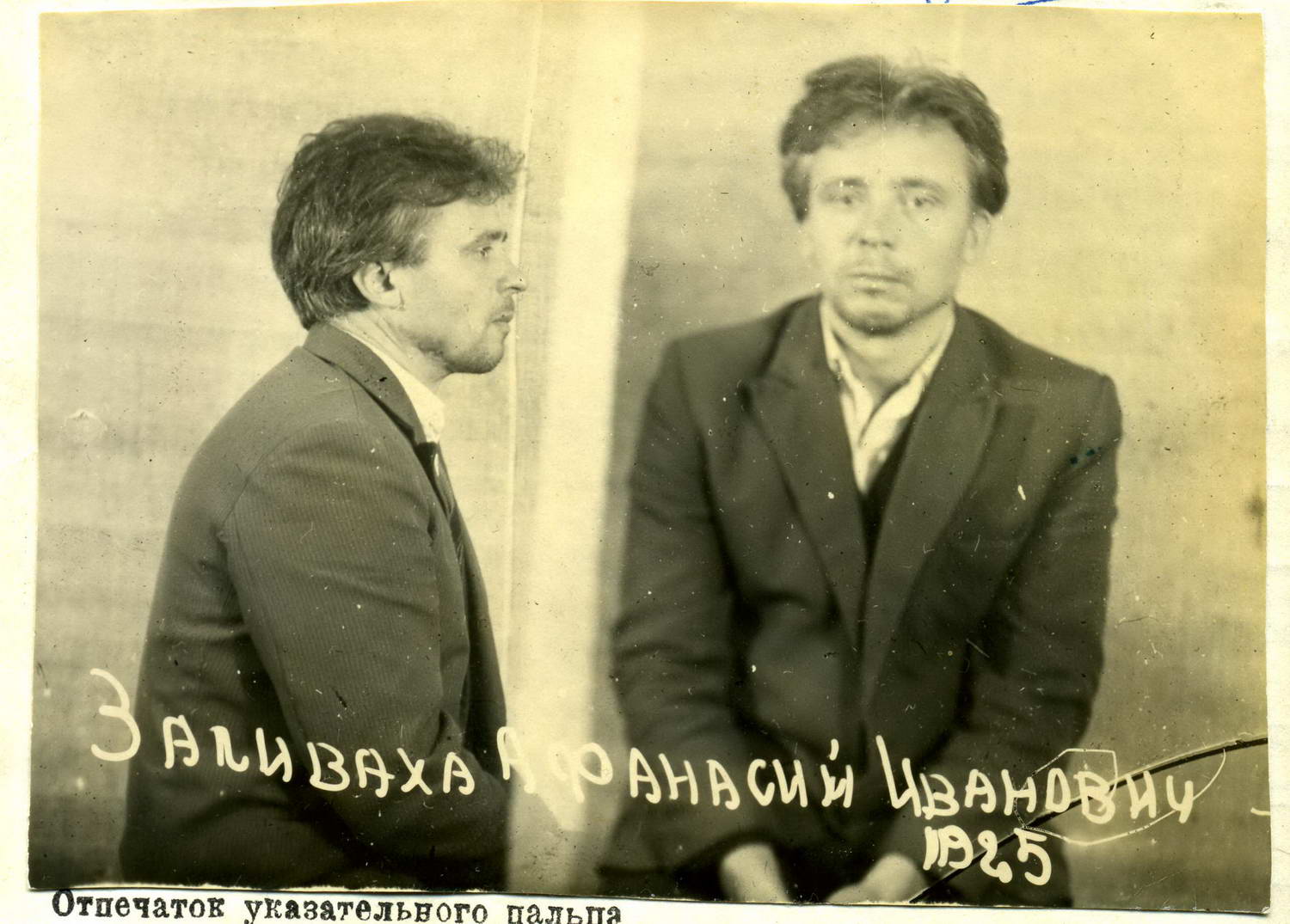 3. The stained glass misrepresents the image of Taras Shevchenko as an archaized Middle Ages icon that has nothing in common with the image of the great revolutionary and democrat [..] The image of Kateryna is in the same icon-like style which is obviously a stylized image of Virgin Mary.
4. Words of Shevchenko were taken out of their context (“I will praise those little muted slaves! I will protect them with the word”)and written with Cyrillic lettering sound ideologically ambiguously in combination with the iconic images.
5. The stained glass composition demonstrates no attempt to show the Soviet mindset of Shevchenko…

After the destruction of the stained Zalyvakha was expelled from the National Union of Artists of Ukraine.

Later the KGB were still interested in Zalyvakha. One of the documents of 1965 mentions that journalist and art expert Bohdan Goryn talked about Zalyvakha during the interrogation that allegedly he can store “anti-Soviet” documents in his apartment . (image 2) His apartment in Ivano-Frankivsk was searched and afterwards a criminal file against Zlyvakha stipulated by the Article 62 of Criminal Case of Ukrainian SSR “anti-Soviet agitation, storage and distribution of anri-Soviet literature and documents” was opened.

Among dangerous “anti-Soviet literature”: Munich publication of “Modern Literature in Ukrainian SSR” written by Ivan Koshelivets, “Collected Articles from the Ukrainian Supreme Liberation Council Newsletter”, “12 Questions for Development of Self-thinking for Pupils”, “Welcome Word during the First Anniversary of Death of Vasyl Symonenko” by Ivan Dziuba, etc. Also the evidence of painter Vasyl Turetsky was attached, namely a photo-copy of a book “Modern literature of Ukrainian SSR” that he claimed to receive from Zalyvakha.

In the explanation to the criminal case Opanas Zalyvakha pointed to the unjustified status of the Ukrainian language:

“ … much of the Ukrainian population living outside the territory of Ukraine in large groups don’t have schools with the native language of education, meanwhile the Russian population living in Ukraine have their own schools, theatres, and media. […] Lenin’s covenants on the Ukrainization of the Ukrainian institutions are not always fulfilled, most of the management acknowledge only Russian language […] Most of the films in Ukraine have no Ukrainian language dubbing which is a barrier to wider understanding of the beauty of the language and cultivation of love to the native language”

Additionally Zalyvakha was accused of distribution of the document “12 Questions for Development of Self-thinking for Pupils”. He lent it to Oleksandr Korovai in July 1965.

Opanas Zalyvakha was also demanded to give evidence against Ivan Svitlychny accusing both Opanas and Ivan in “anti-Soviet activity”, establishing of the organization for “the movement of the national revival” and organizing struggle against the Soviet authorities in collaboration with the Jews basing on the evidence of Vasyl Turetsky:

“... as I remember once Opanas Zalyvakha said that we (meaning participants of national revival movement) and the Jews who live in Ukraine have signed an agreement on the solidarity and common struggle against the national oppression, as according to his words both Ukrainians and the Jews are equally oppressed in the Soviet Union by the Russians and authorities”.

28 January 1966 the KGB investigator in the Ivano-Frankivsk region completed the preliminary investigation and Opanas Zalyvakha was accused of crime stipulated by the Article 62 of the Criminal Code of Ukrainian SSR. However, the regional prosecutor returned the case back to the KGB department claiming to attach “anti-Soviet document “How people talk in Kyiv” to the evidence”.

In this article the artist writes about Russification of Ukraine and Ukrainian language: “It’s getting harder to read Ukrainian press full of Russicisms for the person who knows Ukrainian well, but doesn’t know Russian”. Zalyvakha calls Russification a shameless process that was the result of “... everyday and constant penetration of Soviet culture into the key fields of Ukrainian culture, into all the layers of Ukrainian society”. Russian culture has benefits in Ukraine that the large amount of Ukrainians in Russia can’t claim: “... in the theatres and cinema of Ukraine the repertoire is mostly in Russian, Russian literature becomes bestseller, radio and TV are filled with Russian programs…”

Already 19 February 1966 final indictment stated: “Working as painter of Ivano-Frankivsk artistic fund influenced by the nationalist literature in order to sabotage and weaken Soviet authorities took the path of an active anti-Soviet activity. He systematically stored, copied and distributed slanderous anti-Soviet literature and documents that tarnish Soviet state and social system, policy of CPSU and Soviet government, and with the same goal distributed anti-Soviet slanderous inventions”.

23 March 1966 Judicial college in the criminal case of Ivano-Frankivsk regional court sentenced Opanas Zalyvakha to 5 years in a penal colony under strict regime (Images 7-8) He served his punishment in the camps of Mordovia. When he was released and returned faced unemployment and searches and eventually had to work as showcase decorator.

Culturologist Roman Korohodsky remembered the return of Zalyvakha from the camps the following way: “Approximately in the end of 60s - beginning of 70s my friends began to return from camps after their first imprisonments (during summer 1965). Everyone talked about the camps, KGB staffers, conflicts, friends, new friends… Panas came to us and for the whole day was talking about Immanuel Kant he studied in the camp, about Kafka I sent to him and who appeared to be like-minded for Panas”.

In 1992 the painter was rehabilitated as a victim of political repressions.

Archival criminal file of Opanas Zalyvakha is stored in the Archive of Ivano-Frankivsk SSU department. Samples of pictures painted by the artist are included into the 3 volumes besides the procedural documents.