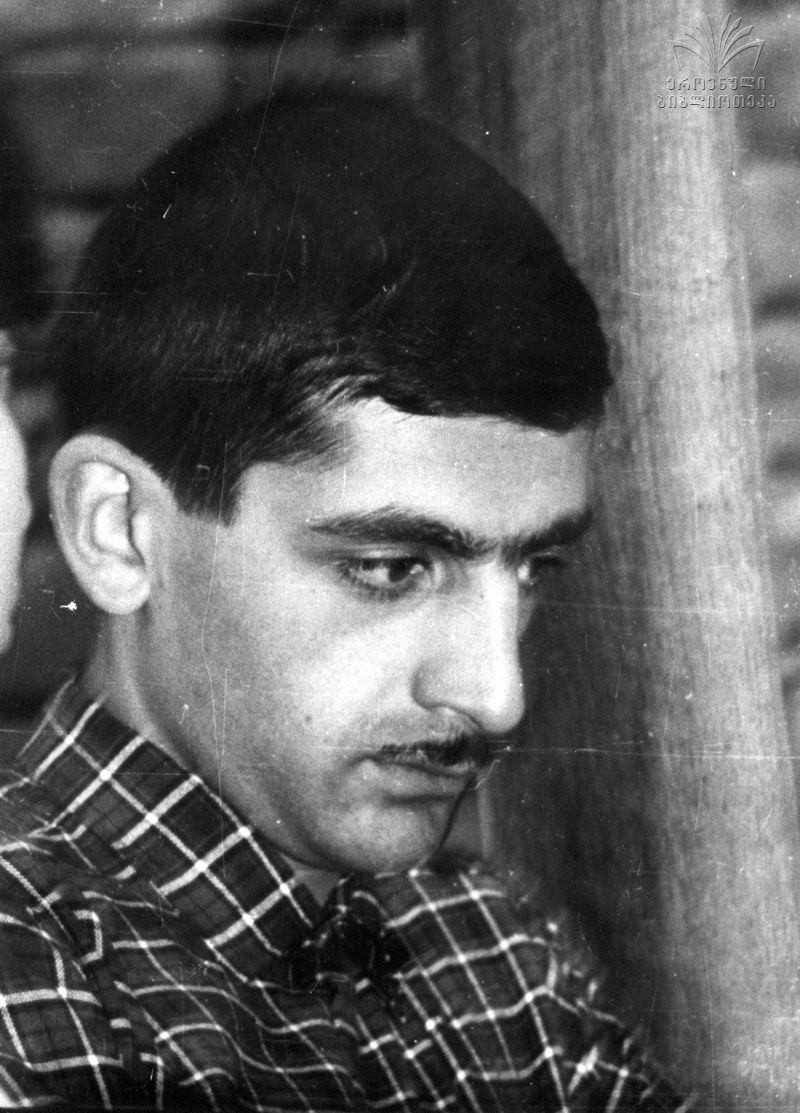 He was born on 31 March 1939 in Tbilisi, in the family of a famous Georgian Writer – Konstantine Gamsakhurdia.

Graduated from the first gimnasium of Tbilisi.

On 15 December 1956, with classmates and friends, Zviad Gamsakhurdia was arrested by the KGB of Georgian SSR as an organizer of an Anti-Soviet group, distributing illegal leaflets. On 5 April 1957, by the Supreme court of Georgian SSR, he was sentenced to three years of imprisonment but was changed by the suspended sentence.

In the 1960s Zviad Gamsakhurdia was working as a PhD candidate on the Western European literature faculty in Tbilisi State University. He was a senior research fellow of the Institute of Georgian Literature of the Georgian Academy of Sciences, associate professor of the Tbilisi State University and member of the Union of Georgia's Writers. He was publishing essays, poetry and translations of western literature.

In 1976 Zviad Gamsakhurdia was one of the founders of the Georgian Helsinki Group. He was involved in the distribution of illegal dissident magazines and leaflets.

On 11 of April 1977, Zviad Gamsakhurdia was arrested by the KGB of the Georgian SSR.

In decision of the Tbilisi city court of Georgian SSR, quoted:

"...In 1974, Gamsakhurdia, Kostava and Rtskhiladze, to camouflage their Anti-Soviet activities and to add an extra meaning to the defamatory documents – putting on slogans like – "defending a human rights", they announced themselves as an "Initiative group for defending a human rights in Georgia" and undercover of this name they accelerated activities.
From 1974 Gamsakhurdia actively started buying and multiplying Anti-Soviet Literature, and for this, he was investing big enough money. In the spring of 1974, near one of the antique bookshops of Moscow, he bought for 150 Rubles a book – "The Archipelago GULAG" (One copy of I–II volumes and 2 copies of III-IV volumes) of A.Solzhenitsyn, who was exiled from the USSR for his enemy activism. The book was printed in the Anti-Soviet publishing house "INKpress" in Paris, and it distorts the Marxist–Leninist ideology about the socialist revolution and dictatorship of the proletariat and presents a hateful and evil analysis of socialist development in our country and insults a work of party and state apparatus of USSR in every stage of its Socialist rebuilding. For the multiplication of this book, Gamsakhurdia bought foil papers for 25 Rubles for offset printing. By order of Gamsakhurdia, polygraphist N.I. Kavtaradze, with sufficient payment, printed I, II, III and IV volumes of "The Archipelago GULAG"...
For giving a wide and systematic character to their Anti-Soviet Propagandist activities, in 1976, Gamsakhurdia and Kostava with Rtskhiladze started to publish illegal magazines – "Oqros Satsmisi" and "Sakartvelos Moambe", where they were printing articles, which contained defamation against the inner and foreign policy of Communist party and were illustrating an internal political situation of USSR in a distorted way. Articles were propagandizing insulting tales against a Soviet state and regime and were glorifying those persons who were fighting against the Soviet country with arms in their hands.
Gamsakhurdia was trying to multiply "Sakartvelos Moambe" with a different approach. In December 1976, Gamsakhurdia managed to multiply editions of "Sakartvelos Moambe" and "Oqros Satsmisi" using offset printing.
Aftermath, Gamsakhurdia, Kostava and Rtskhiladze managed to multiply enough magazines; they organized their distribution on the territory of the USSR, also – abroad. In such a way, those magazines were transferred abroad and were used by the Anti-Soviet radio channel "Liberty" for enemy purposes against the Soviet state".

On 19 May 1977, the Tbilisi city court of Georgian SSR sentenced Zviad Gamsakhurdia to 3 years of strict isolation in a prison camp, but he was sent in "free exile" in Dagestan ASSR (North Caucasus) as, Gamsakhurdia "confessed" and collaborated with the investigation – giving a TV "Repentance", which very negatively affected his reputation as – dissident.

After being released from exile, Gamsakhurdia continued literature work in Tbilisi.

From 1987, with the support and guarantee of the authority of Merab Kostava (who spent 10 years in prisons and exile in Siberia), he soon became a leader of the protest movement in Georgia, and since 1988–1989 he was one of the most active organizers of mass protest demonstrations and actions against Soviet regime, demanding independence of Georgia.

After the brutal suppression of peaceful mass demonstration by the Soviet regime in Tbilisi on 9 April 1989, Gamsakhurdia, as one of the organizers of the demonstration, was arrested by the KGB but soon released because of public pressure.

At the end of December 1991, the coup d'etat started in Tbilisi; on 6 January 1992, Zviad Gamsakhurdia was forced to leave Tbilisi and Georgia and fled to Armenia and next to – Grozny, Chechnya.

On 24 September 1993, during Georgian-Abkhaz war, Zviad Gamsakhurdia returned in west Georgia, trying to use possibility and take over the situation; catch the control of the army and in one hand strike back to Sokhumi direction, against the advance of Abkhazians and their allies and also recapture power in whole Georgia. This step turned catastrophically to him and to the whole state – Georgian armed forces split, Sokhumi has fallen, and Abkhazian autonomy fell under the control of Separatist forces, and Georgia has turned into a hell of civil war.

Zviad Gamsakhurdia died on 31 December 1993 in village Khibula, Samegrelo, in unknown circumstances. Until today, besides the official version of suicide, there are many questions and manipulations about his death.

Archive of former KGB of Georgian SSR contains Criminal file of Zviad Gamsakhurdia and Merab Kostava #7726. 4 main volumes of the file – materials of the investigation, protocols of interrogations of Zviad Gamsakhurdia and Merab Kostava, their appeals etc. are missing. Allegedly those volumes were taken by Gamsakhurdia’s wife at home in 1991. All other volumes contain a wide range of materials – protocols of interrogations of witness, the act of identification of faces, acts of expertise, protocols of house search and detailed descriptions of founded illegal literature and documentation, entire hard copies of illegal editions printed by Gamsakhurdia, Kostava and members of Helsinki group of Georgia.

Everyone can read and download the KGB documents about Zviad Gamsakhurdia on the website of the Digital Archive of the Ukrainian liberation movement.