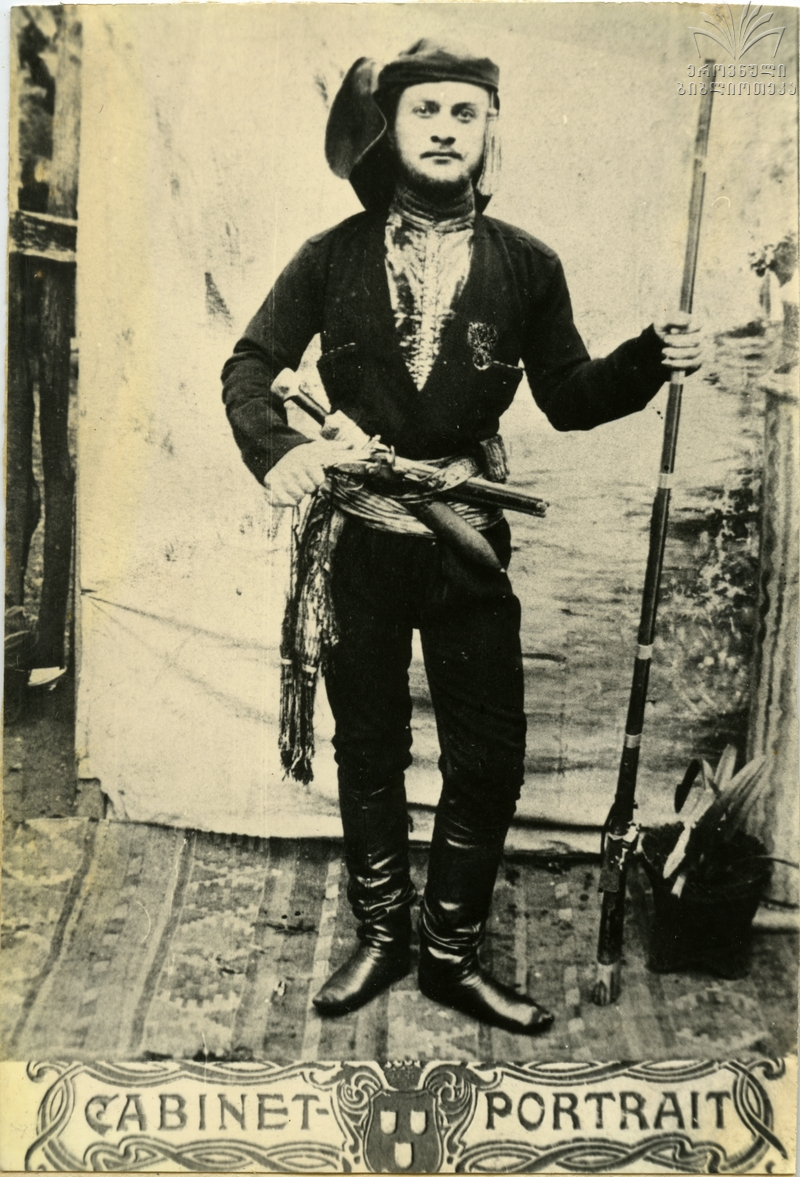 Was born in 1881, in the Ozurgeti city (West Georgia, Guria). Graduated Tiflisi school of young officers. Was serving in the Russian Empire army, as Second lieutenant in No.156 Elisovetopol infantry regiment. From 1903 was a member of the Russian Social–Democratic Labour party in the underground.

Actively participated in the First Russian Revolution of 1905, in west Georgia, his homeland Guria, which was a most active zone of the Revolutionary movement. Was arrested in 1906 and sentenced to 4 year of penal servitude. After the imprisonment, from 1910 he was living in exile in Siberia, Irkutsk. David Kartsivadze was released from exile after the February Revolution of 1917 and returned back to homeland.

After the occupation of Georgia by Soviet Russia in 1921, David Kartsivadze was involved in the resistance movement, working underground for mobilization of officers. Officially he was working in People's Commissariat of Grocery of Georgian SSR, in People's Commissariat of Interior and in the cooperative bank; was member of Society of political prisoners and continued being member of Writers union of Georgian SSR.

David Kartsivadze was arrested by Georgian SSR Cheka, on 24 of May 1922, before a protest demonstration dedicated to 26 of May, day of independence of Georgia. Was sitting in Metekhi Prison (#2 “Correctional house”). Cheka was permanently extending his imprisonment, beside appeals from the writers union, family members and relatives and poor condition of health of David Kartsivadze.

In the Cheka’s informants report about David Kartsivadze is quoted:

“... During his imprisonment always was negotiating with Isidor Ramishvili, Dgebuadze, member of headquarter of National Guard - Kahiani and Vardoiani. Was addressing the arrested officers and infiltrating them for future activities “after liberation” … Kartsivadze, during imprisonment, was an editor of “Workers protest” against the exile of Mensheviks.”

On 26 July of 1923, Presidium of Cheka of Georgian SSR sentenced him to imprisonment of 2 years under control of OGPU, but David Kartsivadze was still staying in Tbilisi prisons due to health conditions.

On 28 of August 1924, a mass Anti–Soviet uprising started in Georgia. The Soviet regime immediately started a mass execution of political prisoners. David Kartsivadthe was shot in Tbilisi during uprising days (28 August – 3 September), with hundreds of other political prisoners and captured citizens.

In 1927, his brother – Ivan Kartsivadze, who was also member of Georgian Social–Democratic Labour Party and was living in emigration since 1921, was sent as a secret emisar in homeland and soon was arrested in Georgia and exiled in Siberia. He was Shot during the great Soviet terror of 1937–1938.

After the execution of David Kartsivadye, part of his diary and manuscripts survived and were kept in a relative's family. Fragments of the diary were printed in the Georgian press in 1989. Now part of his manuscripts are given to the National Parliament Library of Georgia and memorial artifacts are kept in successors family.

In former archive of KGB of Georgian SSR 2 criminal cases of David Kartsivadze are kept #22156 and #23277. Cases contain orders of arrest, personal list of David Kartsivadze, protocols of interrogations, correspondence of Cheka’s divisions about him, appeals of Kartsivadze, Agent information about him etc. State security is focused to identify David Kartsivadzes role in the underground movement as a former military officer and his background as – Poet and revolutionary is neglected. Cheka also rejected the appeal of the Georgian writers union on behalf of David Kartsivadze.

Everyone can see and download the KGB documents about David Kartsivadze on the website of the Digital Archive of the Ukrainian liberation movement.