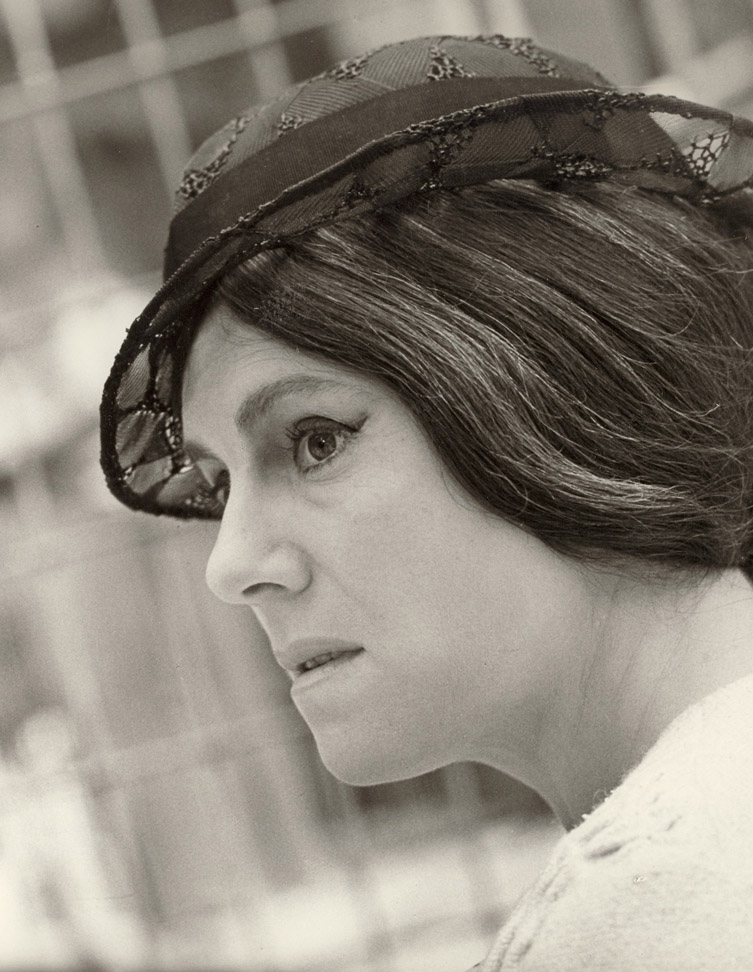 From 1950, she was a member of the dramatic theatre troupe of Na Vinohradech Theatre in Prague, which operated under the Czechoslovak People’s Army’s administration at the time. She was prohibited from performing publicly from the early 1970s and throughout the 1980s due to her dissident activities, and she did not return to her acting career before November 1989. She was a member of the National Theatre’s dramatic theatre troupe from 1991 to 2010.

The Military Counterintelligence Unit first took interest in her in 1954, but Chramostová rejected the offer of collaboration at the time. She was contacted again in 1957 and eventually consented to collaborate. The liberalisation that came with Nikita Khrushchev’s arrival as the head of the Soviet communist party and the policy of destalinisation caused people in Czechoslovakia to perceive the communist party differently: “The two unwelcome gentlemen came into my apartment. (…) I know for sure that I wanted to get rid of them at all costs that day, but I find it possible that, deep inside, I also admitted that if I surrendered, it would not be such a terrible crime given the new political situation.”

Given the cover name Klára, she was first listed as an “informer” and, from 1961, as an “agent”, collaborating until 1964. Her Military Counterintelligence evaluation from 1961 says: “The collaborator “KLÁRA” was won for collaboration with the MoI [Ministry of the Interior] on 13 Nov 1957 on an idea basis. During the course of the collaboration, the person proved a serious, capable and active collaborator with a positive relationship to the MoI. Among the flawed persons in the theatre segment, the person has broad opportunities and qualification given their popularity. The person is gregarious and intelligent, and easily wins confidence in a hostile environment.”

Vlasta Chramostová did not try to cover up her StB collaboration later on in her memoirs; in fact, she saw it as a big mistake and tried to explain it: “Mephistopheles slipped me a blank sheet of paper and a pen. (…) Since I wanted to be famous; I wanted to use all my abilities, which still seemed untapped to me despite a great deal of success, without having to tackle obstacles; I wanted to go abroad one day, get to know the world, make some money and not have to count every penny or borrow or feed someone… I wanted to be happy one day.”

Chramostová joined the Communist Party of Czechoslovakia (“CPC”) in 1962. The turning point in her life came in August 1968 when she condemned the violent invasion of the Warsaw Pact armies. She exited the CPC and publicly criticised the party’s new leadership of Gustáv Husák and the ensuing normalisation. She was banned from filming in 1969, left the troupe at Na Vinohradech in 1970 and was banned from pursuing any artistic activity in 1972.

She was one of the first signatories of the Declaration of Charter 77 of 1 January 1977. She went on to become one of the key and best-known proponents of Charter 77. Aside from her dissident activities, she organised ‘living room theatre’ because she could not act publicly. Theatrical performances were organised directly in her apartment, and they turned into venues for dissident meetings over time. Viewers of the performances were often arrested and, several times, transported to a place dozens of kilometres away from Prague for interrogation and then left helpless in the middle of the night.

StB took interest in Chramostová shortly after she had signed Charter 77. According to a report of June 1980, “Despite the preventative measures taken, Vlasta Chramostová continues her intensive hostile and antisocialist activities. She has been noted to keep in contact with leading rightists. Her apartment in Prague 2, Čelakovského sady 10/433, often hosts meetings and parties involving the mentioned persons (KOHOUT, HAVEL, PAVLÍČEK), which are definitely antisocialist in nature.”

StB kept a file on her in the “verified person” category from March 1977, a “personal file” from 1980 and eventually a “hostile person file” from 1982 on. StB intended primarily to prevent Chramostová from pursuing anti-regime activities and isolate her socially.

StB won several persons close to her for collaboration and monitored her activities with specific technological means such as wiretapping, by checking her letters, and conducting secret home searches. Vlasta Chramostová and Libuše Šilhánová sent an open letter of protest to President Gustáv Husák concerning the violent police raids on demonstrations in Prague in January 1989; both were sentenced for three-month imprisonment and paroled with a probation period of one year.