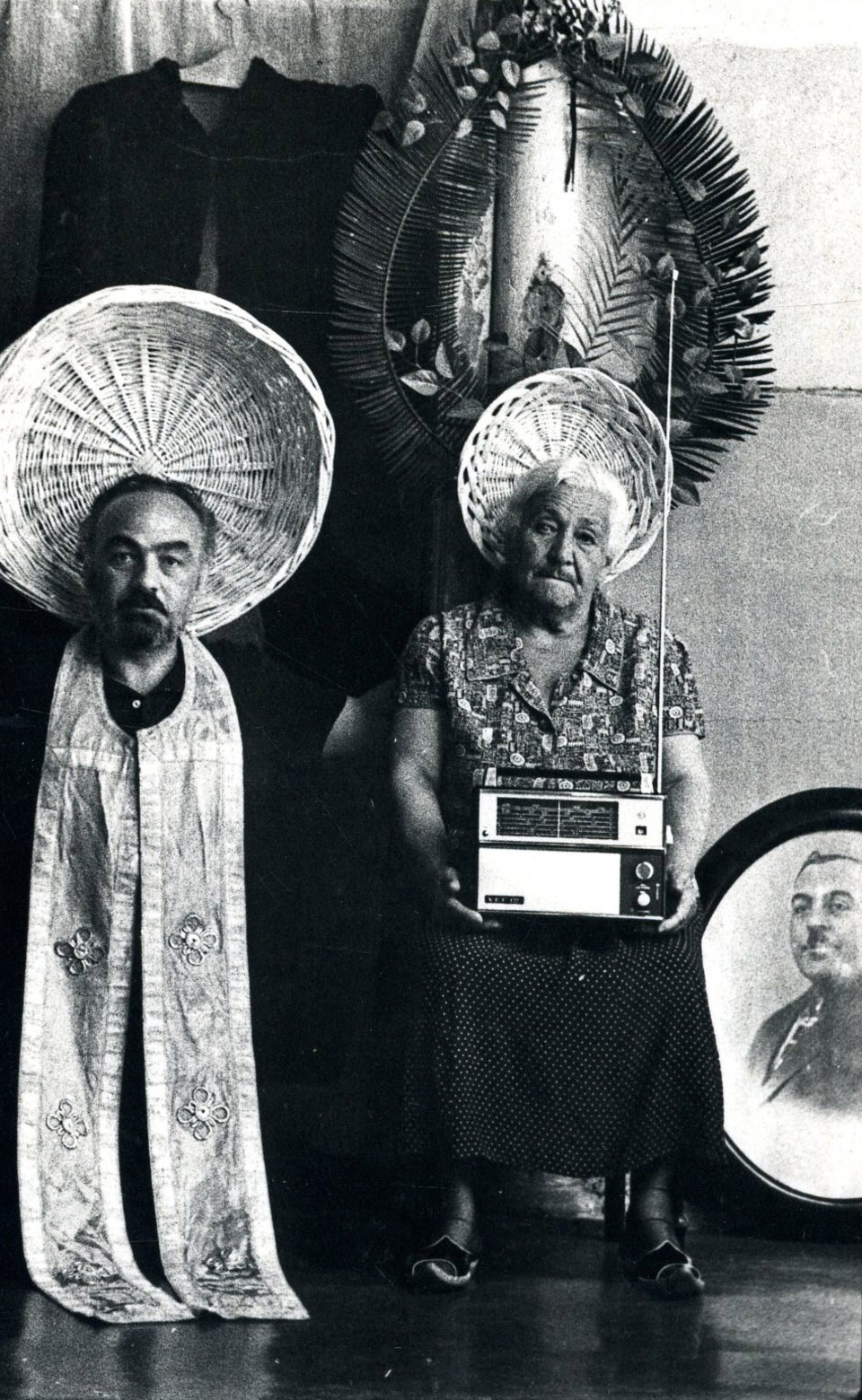 Sergiy Paradzhanov was born in Tbilisi. He studied movie production in Moscow with Oleksandr Dovzhenko as one of his lecturers.

During production of the film in Tbilisi in 1948 Paradzhanov with a group of other people was arrested and tried, officially for the same-sex relationships. There is also a version of a political subtext of the case, however there is a lack of information to prove it. The director was sentenced to 5 years of deprivation of liberty but after the cassation appeal he was released the same year.

In 1952 Sergiy Paradzhanov moved to Kyiv where he debuted as a movie director. Soon he was spotted by the state security bodies as somebody reported that Paradzhanov criticized the Soviet system for the lack of creative liberty.

Paradzhanov became famous in 1965 after making “Shadows of Forgotten Ancestors” film. Soon his name is regularly mentioned in informational reports of KGB of the Ukrainian SSR to the supreme leadership of the republic. The film itself was also mentioned in KGB summaries as during the premiere visitors protested against the arrests of Ukrainian intellectuals. The protest was arranged by Ivan Dzyuba, Vasyl Stus and Vyacheslav Chornovil, Paradzhanov himself had nothing to do with that, however his reaction was positive.

Anti-Soviet quotes, collected by the KGB agents, fully fit the original Paradzhanov’s flamboyant provocative style full of sudden artistic images. Occasionally it seems that the director realised he was talking to the state security bodies and was just poking fun at them, telling complete nonsense.

“Do you want a sabre as a gift from me? Large sabre to kill Communists!”

“This is such a thing we use during the council elections”

The KGB was extremely concerned with the intimations and direct promises of Paradzhanov not to return from the next trip abroad. However researchers suppose he was unlikely to really have such plans.

Paradzhanov wasn’t a dissident in regular meaning of this word but he was friends with the participants of the Ukrainian non-violent resistance, helped the repressed, signed the appeals in their favor. He had especially close relations with Ivan Dzyuba and his wife Marta.

“Recently Paradzhanov was surrounded by different enemy and anti-social elements. Meanwhile he stayed in contact with the extremist nationalists, in particular with I. Dzyuba, Y. Sverstiuk, I. Svitlycnhy, M. Kholodny and others who used the premiere of his film “Shadows of Forgotten Ancestors” for the open anti-Soviet demonstrations.
After the people mentioned above were brought to trial in 1972-1973 for their anti-Soviet nationalist activity, Paradzhanov had the intention to organize a “mass protest” campaign. He also financially sustained the family of I. Dzyuba”

In 1973 Sergiy Paradzhanov was arrested and subsequently he was sentenced to 5 years of deprivation of liberty for “sodomy” and “distribution of pornograhy”. The context and range of indirect signs show that the process had political groundings, and the KGB and party leadership were the initiators, though officially the investigation was held by the police. Besides, the KGB reported about their activity to create Paradzhanov’s reputation of a “reprobate” in order to scare away his supporters. It didn’t work: world-famous cultural figures joined the campaign to release Paradzhanov, particularly movie directors Federico Fellini and Jean-Luc Godard.

“In order to compromise foreign anti-Soviet ideologic centres and prevent further biased rumors in June 1974 with the efforts of the KGB at the Council of Ministers of USSR the article In the Name of Law published in Vechirny Kyiv newspaper was made known to the foreign journalists accredited in Moscow. The article contained the information that Paradzhanov has ruined his family, embarked the path of debauchery, turned his apartment into the disorderly house.
Due to these measures Soviet and foreign public had the opportunity to see the true face of Paradzhanov and those who were going to protect him”.

While imprisoned Paradzhanov was still watched by the KGB. According to their documents Paradzhanov didn’t change his views. He was released in 1977 a year before the end of the term of deprivation. After the release Sergiy Paradzhanov left Ukraine and moved to his home city Tbilisi.

For a long time he was restricted to film movies. He was again arrested in Tbilisi in 1982 allegedly for the attempted bribe. The fact that Paradzhanov kept annoying the KGB with his behaviour was widely considered as the real reason. Due to the expansive support was sentenced to a conditional sentence.

During the last years of his life Paradzhanov filmed a few more movies. He died in Yerevan in 1990.

In 1973 the KGB initiated operational cultivation files on Paradzhanov named “Parasite”. It was lost in the archive, presumably the documents were destroyed in the end of 1980s. Reports of the KGB to the CC CPU stored in fond 16 of the SSU Sectoral State Archive are dedicated to the sentiment and behavior of Paradzhanov.