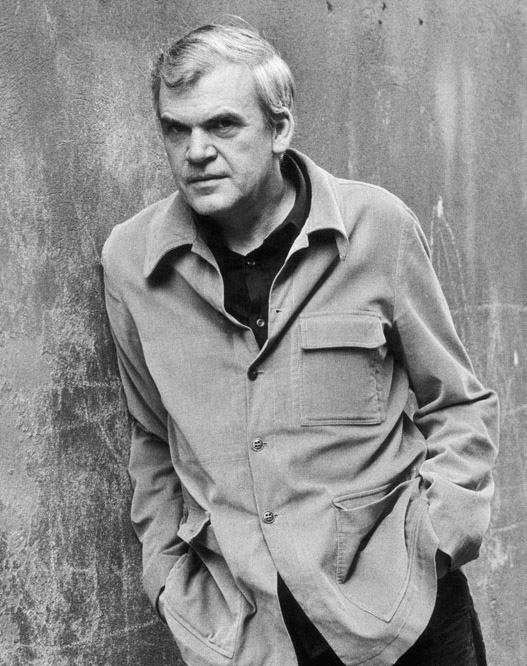 Milan Kundera is one of the best-known Czech writers.

He also wrote poems, essays and dramas, but he later condemned his early work. He was a member of the communist party from 1948. He was expelled in 1950 when StB caught his correspondence with Jan Trefulka, in which they mocked the party’s top officials.

Despite this, Kundera was allowed to complete his studies of the Film and TV School of the Academy of Performing Arts; he graduated in 1953 and stayed there as a teacher and literature lecturer. He joined the CPC again in 1956. He was one of the most popular Czech writers in the 1960s, even earning the Klement Gottwald State Prize.

In the late 1960s, Kundera endorsed the reformist efforts geared towards the democratisation of the communist regime, and had to face censorship as a result. He was actively involved in the Prague Spring in 1968, and was persecuted by the normalisation regime following the Warsaw Pact occupation of Czechoslovakia.

His wife was laid off in 1969 and Milan Kundera was dismissed and expelled from the communist party again in 1970. He published his own texts under fictitious names and made his living as an astrologer and horoscope writer under a pseudonym for some time. He was included in a list of forbidden authors in the early 1970s, was not allowed to publish, and his books were removed from libraries.

He did not pursue openly anti-regime activities, yet he was under StB surveillance. The first signs of Milan Kundera’s collaboration with the communist power date back to the 1950s. In 2008, historian Adam Hradilek published a text that allegedly confirms that Kundera, at age 20, turned Miroslav Dvořáček in to StB. The writer denies any involvement in the case. There are two documents that indirectly suggest that he actually was an informer.

The document published by Adam Hradilek indicates that “Student Milan Kundera, born on 1 April 1929, came to the District Police Office, 6th Section, II, Prague 6 (…) and said that student Iva Militká lived in the dormitory, who told student Dlask from the same dormitory that she had met a person she knew named Miroslav Dvořáček in Prague’s Klárov that day. Dvořáček reportedly asked her to keep one suitcase for him until he retrieves it in the afternoon.”

The second piece of indirect evidence of Kundera’s collaboration with StB is a lecture of the period Deputy Minister of Interior, Jaroslav Jerman, “On Defending the Country from Internal and External Enemies”, which was later released in a book. In it, Jerman praised the good cooperation between StB and citizens, thanks to which “our enemies” were revealed. By way of example of such cooperation, the Deputy Minister cited a case where “Student M. K. arrived at the District Police Office in Prague 6 on 14 March 1950” and reported that a suspect suitcase was being kept at a dormitory.

Kundera’s part in the case of Miroslav Dvořáček’s subsequent arrest is the subject of speculations to this day. Period context is crucial for understanding this case. In the early 1950s, purges in society and political show trials started in Czechoslovakia. Milan Kundera, aged 20 at the time, was a dorm confident, and keeping an eye on situations such as this was part of his job description. As much as the incident fits in with the period context, the writer resolutely denies his involvement in it.

StB set its sights on Milan Kundera again at the turn of the 1960s and 1970s. The proposal “for recording a hostile person in category no. II/21 regarding university employee Milan Kundera” was signed in 1970. StB monitored him through a network of secret collaborators and using special equipment: wiretapping his apartment and telephone and checking his mail.

Faced with an impasse, Kundera opted to negotiate with the communist regime regarding a job in the West. After a series of discussions, he was allowed to take a one-year working stay in France in 1975. StB already considered his return to Czechoslovakia undesired at the time: “Once KUNDERA departs, commence interrogations of some of KUNDERA’s close contacts, specifically Natálie VADLEJCHOVÁ who, according to technically obtained information, gave KUNDERA certain written material of unknown content; Marie EVOROVÁ who, according to our knowledge to date, appears to be KUNDERA’s French connection. If both of them and other persons are interrogated on the grounds of suspicion of espionage, KUNDERA will definitely know about it. This can substantially affect KUNDERA’s decision on returning to Czechoslovakia.”

Exiled in France, Milan Kundera lectured at the university in Rennes and later in Paris. The Czechoslovak regime issued him with an “émigré passport” commonly provided to people living legally abroad who remained Czechoslovak citizens. When Kundera wanted to visit Czechoslovakia in 1978, he was not allowed to. The next year, his Czechoslovak citizenship was withdrawn on the pretext of the publication of his novel, The Book of Laughter and Oblivion.